The newly formed charity Cat’s Whiskers Community Arts Projects and the New Horizons group will be presenting a show under the title New Horizons Presents at the Bush Theatre Studio on Friday 16th August at 7.30 pm.

The show is a double bill of new work, comprising a rehearsed reading of scenes from Dangerous Women, a play about Wallis Simpson and Diana Mosley written by company member Chrissie Fraser, which is currently in development and The Waiting Room a disturbing drama devised by the group through improvisation. The programme also includes the premiere screening of the group’s film A Vintage Selection. 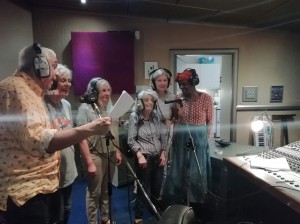 Recording music sequences in the audio studio for A Vintage Selection 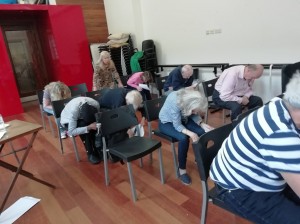 In rehearsal – The Waiting Room

Tickets for the show on 16th August can be booked via Eventbrite.

Some members of the New Horizons group took part in the Bush Theatre community theater project Philoxenia in January. 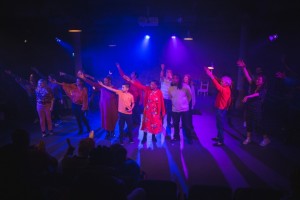 Philoxenia means “to love strangers;  hospitality”,  The theme of the show was “home” in all its many meanings and connotations. 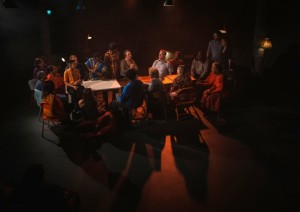 In September some members of the New Horizons group appeared in Ben Okri’s adaptation of Camus’ The Outsider at the Print Room, Notting Hill.  Directed by Abbey Wright. 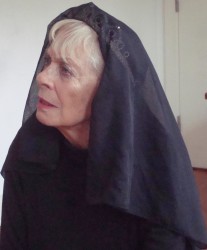 A Vintage Selection. As part of the centre’s 10th Anniversary celebrations, the New Horizons Drama Group performed a mixed programme of devised and scripted work under the direction of Carol Allen. We have since filmed the show and the film will premier as part of New Horizons Presents at the Bush Theatre Studio on Friday 16th August.   See also our Films page. 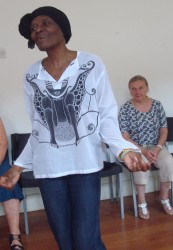 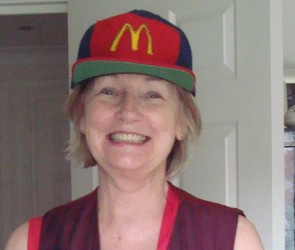 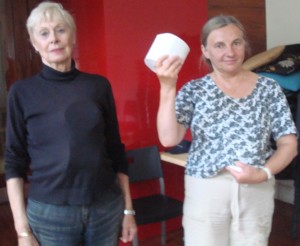 Members of the group are also took part in Carnival Journeys, a joint production by the Victoria and Albert museum and Complicite Theatre, which was performed in the Notting Hill festival and in the grounds of the V & A in June 2016

War Babies, a new play written and directed by Carol Allen, was performed in July 2016 as part of the “Women and War” festival season produced by the So and So Arts Club at 6 Frederick’s Place, London EC2R 8AB. 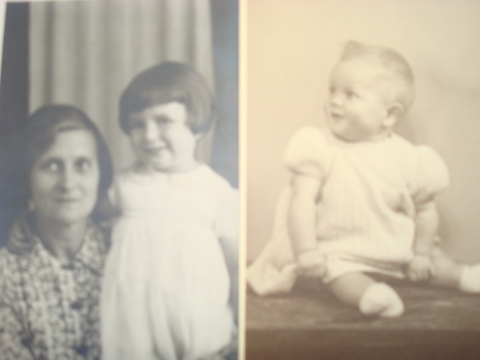 Kate and Louise meet for coffee. Kate is a former war correspondent and Louise a French born grandmother and widow of her English husband. Both were born in World War Two. Kate’s mother was Grace, a London ambulance driver in the blitz, Louise’s was Marguerite, a French wartime resistance worker. Neither woman knew her father. Their stories are revealed in a tale of war and peace, life and death, love – and theatre. 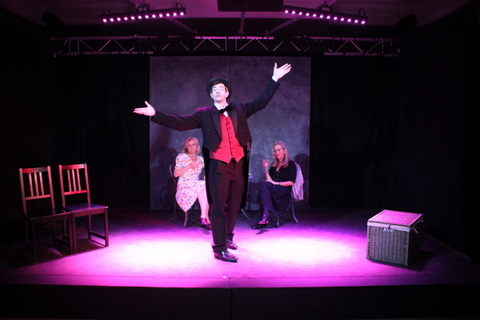 War Babies – the cast and crew 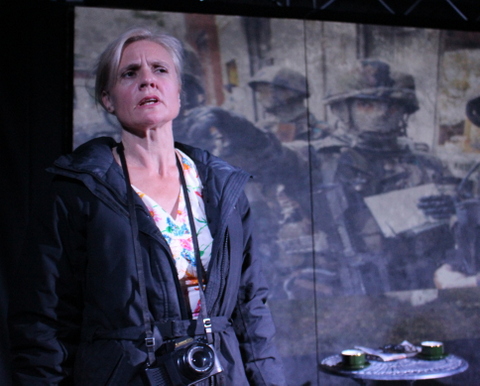 Kate in the war zone 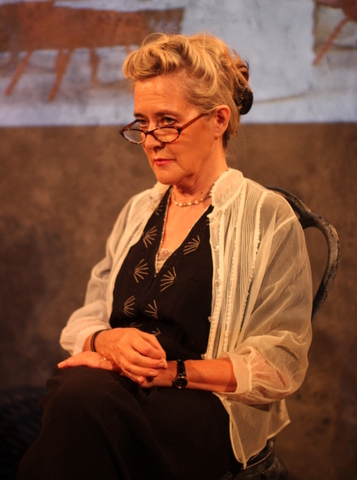 Louise in the cafe 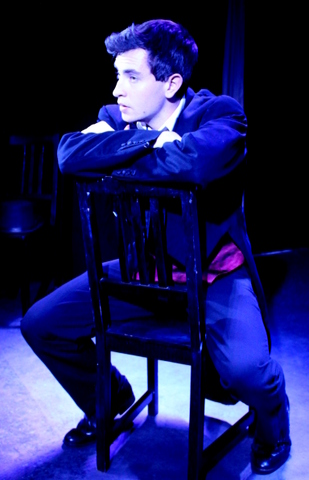 Gloria aka Glee, a monologue by Carol Allen about a  bi-polar woman was performed in a a programme of new writing in August 2015 on the theme of “The Interview” at the Leicester Square Theatre. A further monologue Do You Speak Cat?, a comic piece told from the point of view of a hungry feline, was part of  “Make the Cut”  at the St James’s Theatre in May 2016.  Both pieces were produced by Directors Cut  https://www.stjamestheatre.co.uk/studio/make-the-cut-3/ 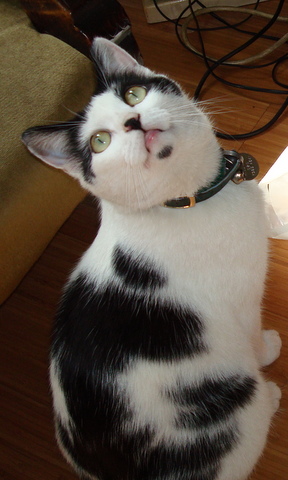 Miou Miou, the inspiration for “Do You Speak Cat?”

In June 2015 the New Horizons group performed The Glorious Georges at Kensington Palace. This was a site specific piece written and directed by Carol Allen about the history of the palace in the 18th century. 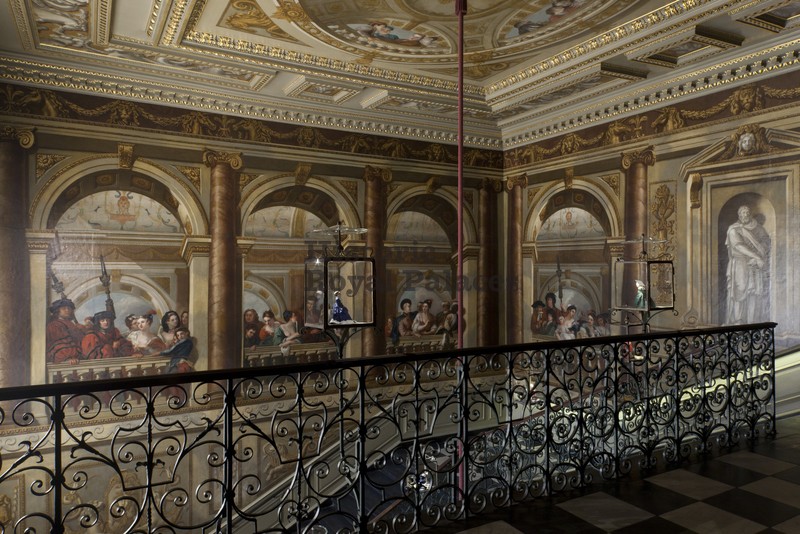 The King’s Staircase at Kensington Palace, which features in the play

News website YNUKTV carried a report of the event.

In 2014 through the So and So Arts Club (see Going Back below) Carol linked up with Macfarland Ray Productions for whom she developed and directed a radical contemporary version of Shakespeare’s The Merchant of Venice which was mounted at the Drayton Arms Theatre, Old Brompton Road in June 2014, where it played to full houses for every performance. 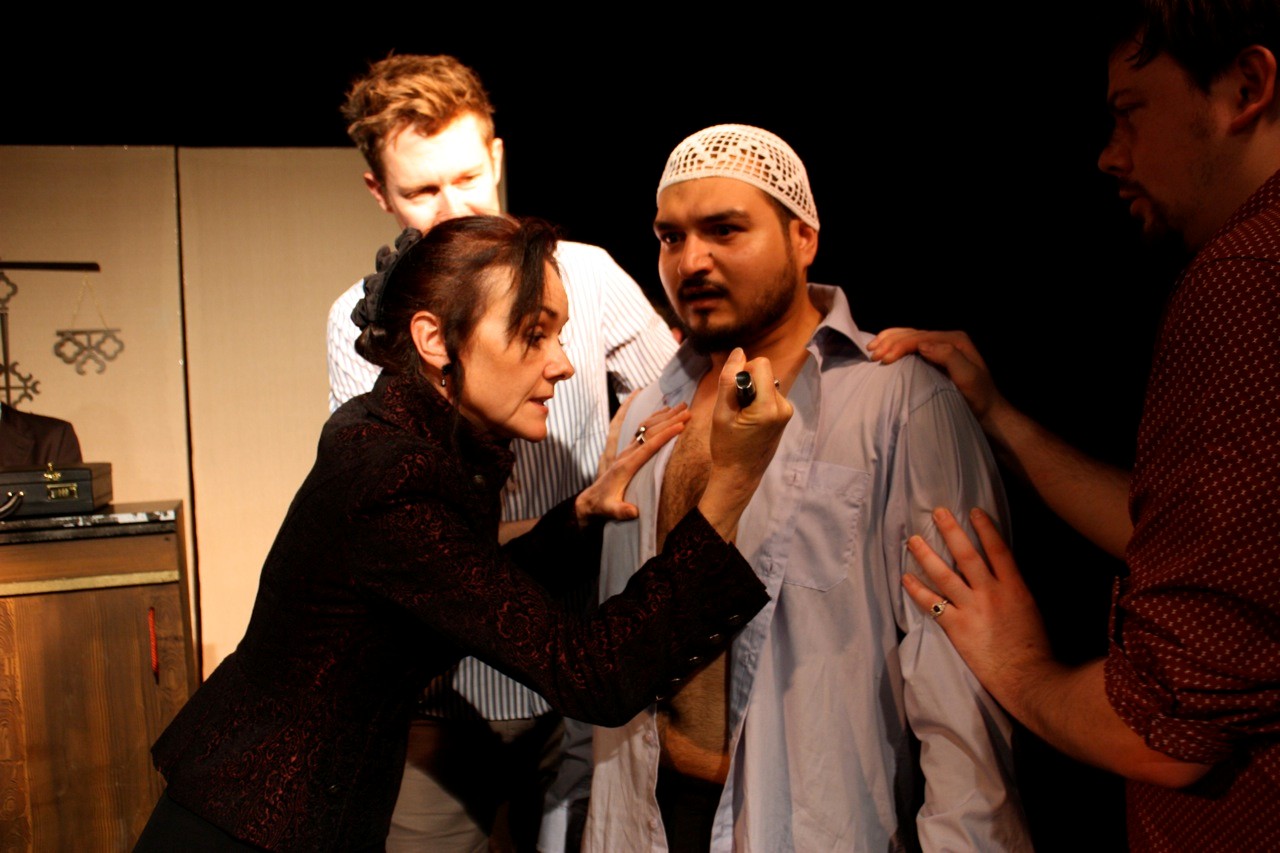 Although written in the closing years of the sixteenth century, the themes of Shakespeare’s “The Merchant of Venice” – cultural and racial prejudice/conflict, financial issues and the empowerment of women – resonate in today’s world. The 21st Century Merchant of Venice is a radical, contemporary view of the play reflecting today’s multi-cultural society, in which several of the characters are black or Asian; some are gay, including Antonio, a wealthy Muslim, who suppresses his sexuality because of his religion; Shylock (now Sara Sherman) is a high flying woman in the world of finance; and Portia and Nerissa take control of their lives and create their own emancipation.

This was an open book profit share enterprise financed from a Kickstarter campaign and through the box office. 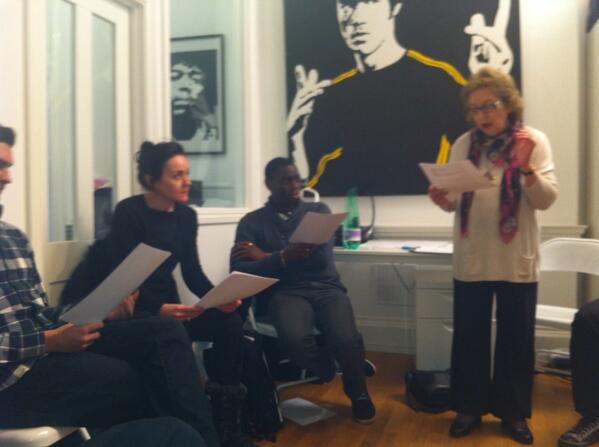 The director and some of the actors seen here taking part in a character development exploratory workshop session on the play prior to production. Many of the actors who took part in the workshop were later cast in the show.

PREVIOUS CAT’S WHISKERS THEATRE PRODUCTIONS
The film Miss Threadgold was adapted from the play of that name by Pat Calder and Dorothy Adibi, both students in Carol Allen’s older learners drama class at the New Horizons Centre in Chelsea. Under Carol’s direction the group has performed six programmes of rehearsed improvisations and short plays for members of the centre, culminating in a public performance, Age Cannot Wither, in December 2012 at the Drayton  Theatre in Kensington. The show included scenes from Dickens’ Great Expectations and Oliver Twist, in which Oliver was played by 91 year old Ray Shaw. 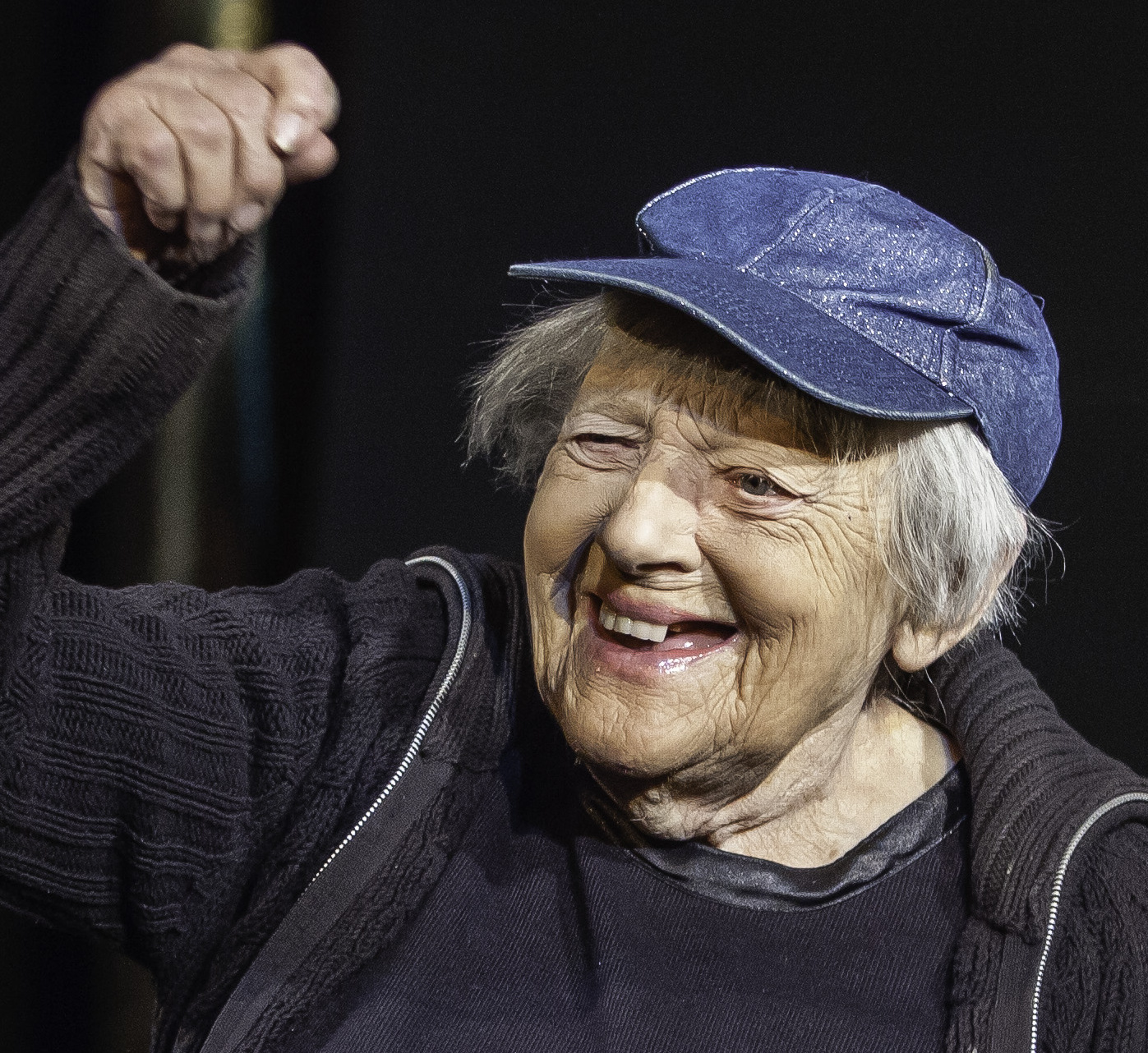 Also included in the Age Cannot Wither programme was a one act play Going Back, written by Chrissie Fraser and Carol Allen from a novel Chrissie is in the process of writing. Going Back was then presented in a professional showcase production at the Tristan Bates Theatre in July 2013 as part of the Kick up the Arts festival organised by the So and So Arts Club. Julia was played by Jackie Lye, Leyla by Jo Cooklin with Taran Bolina as Ahmed and Claire Jared as Lizzie. The play was directed by Carol Allen. 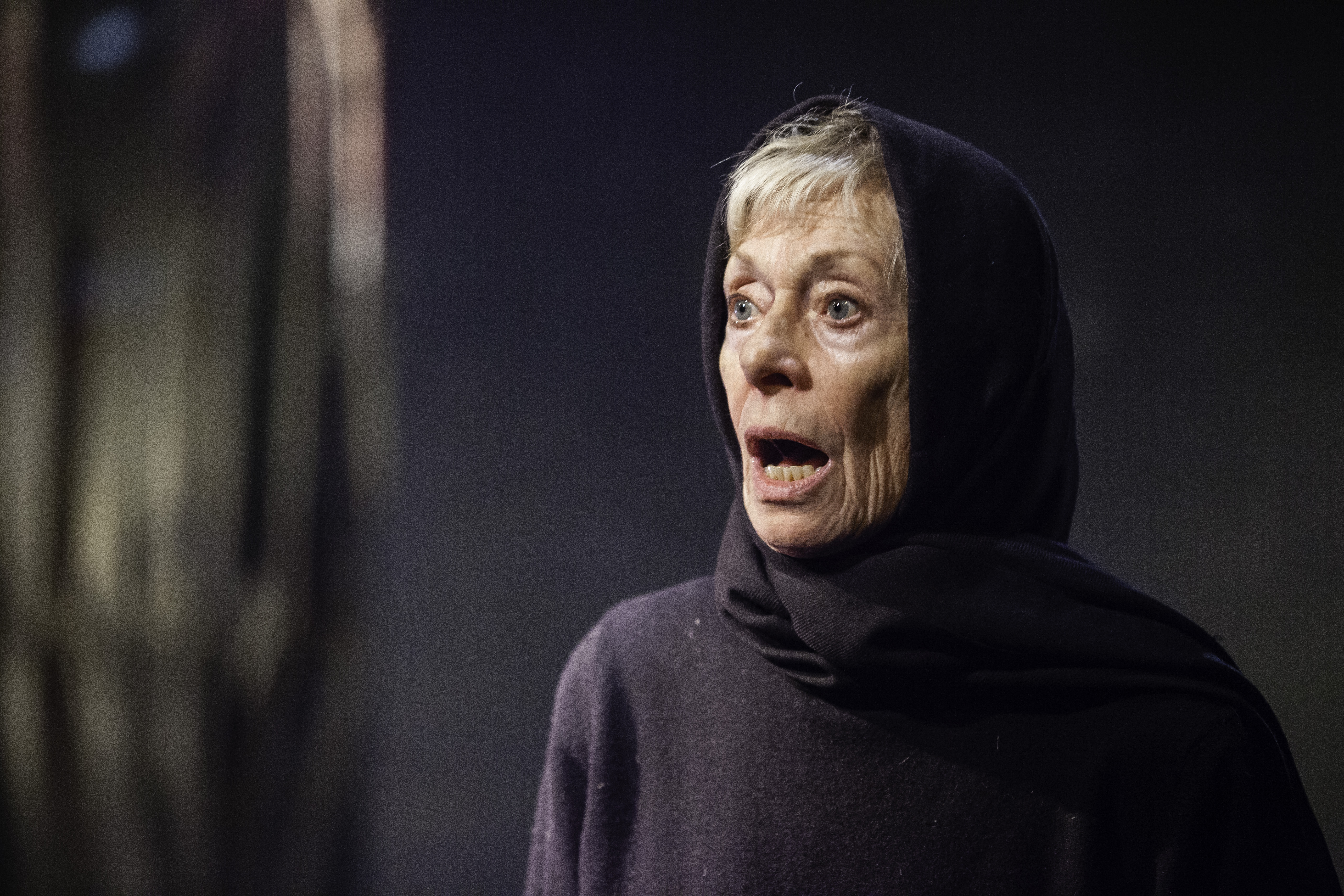 The story: At the funeral of her mother Lizzie, Julie sees a woman in a burka observing from a distance. That first sight of Leyla is the start of a shocking and poignant journey into Lizzie’s life when young, which totally changes Julie’s view of the woman she knew as her mother.